If you can find something, like antique Japanese scroll paintings, for instance, that can still be acquired fairly cheaply (well, at least until recently – Westerners are not used to rolling up and switching out our paintings), and you genuinely like them, you should go for it.  Japanese painted folding screens are already often in five figures, but we know how to display those.  Unlike Chinese art, which is currently being snapped up by the Chinese, Japanese art is otherwise undervalued, and while I think collecting for the sake of investing is like hoping to make money betting on horse races, the true collector can still do well if he chooses his interests carefully.  It is important to remember that younger generations apparently prefer experiences to collections, so we old fogies can hope for bargains in times to come.  This applies mainly to art; I would avoid “collectibles”; I am given to understand that the values of many collectibles have in many cases gone down because those under the age of thirty would rather pay for trips abroad than collect objets.  This is understandable, but I have trouble remembering my foreign travels in great detail even with pictures, while I can always enjoy a Steuben exhibition piece or a kakemono (Japanese scroll).

To see how the market works, consider the atelier of Peter Carl Fabergé.  Perhaps the most famous goldsmith in history (only Cellini comes to mind as being as famous), Fabergé is best known for a series of elaborate Easter Eggs he made for the Tsar to give as an Easter gift to the Empresses Maria Fedorovna and Alexandra.  Nicholas II’s father gave to his wife; Nicholas himself to his wife and his mother.  Masterpieces of goldsmith’s work, the Eggs are justly famous.  They also have made Fabergé a household name.

To show the extent of Fabergé’s fame, in 2014, the third Imperial Russian Easter Egg was auctioned off.  It had been bought for $14,000 as scrap metal by an American who took a long time to figure out that he had something more than scrap gold.  He finally searched for “egg” and “Vacheron Constantine” online; the later was the name on the egg’s timepiece.  (Fabergé eggs almost always had a “surprise” inside the eggs, a few of which were made for Barbara Kelch, the wife of a Russian nobleman,)  Originally the property of the Empress Maria Fedorovna, the egg and timepiece fetched $33 million dollars at auction. 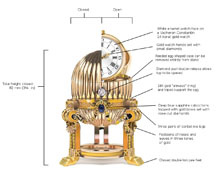 Fabergé seems to have left the work of his shop to some 500 employees and designers.  His Cyrillic mark, under the Romanov double-eagle he used by appointment to the Tsar, is one of the most famous marks in the world, and perhaps the most forged.  Smaller pieces of jewelry, at least in the St. Petersburg shop, were marked only with the karat mark and the initials of the work master and perhaps an inventory number.  Faberge sold smaller egg pendants and other jewelry, silver, and even picture frames, bell pushes, and cigarette cases.  One can still buy works by his firm at Wartski in London, À la Vielle Russie in New York City, and Romanov Russia online.

Here is the point of all this Imperial history.  At Russian Easter, eggs abounded.  One can by an good antique guilloche enamel Russian egg pendant for a few thousand dollars, but if the egg is clearly one of Fabergé’s, it will be three or four times the price of a merely beautiful egg from another firm in the period.  Similarly, a while back Romanov Russia had a unique Fabergé crucifix for sale, enamel on gold.  Now it was a strikingly unusual piece, Byzantine with art nouveau influences, and it was both beautiful and beautifully crafted.  An ordinary enameled gold cross without the Fabergé provenance was a very few thousand dollars; the Fabergé crucifix was offered at least three times the cost of an “ordinary” enamel Crucifix.  Granted, Fabergé’s craftsmanship is of the first order, and his designs can be, as this one was, unusual.  But I am pretty sure that the reason it costs so much more than other crosses was because it could be attributed to Fabergé.

Had I the money necessary to collect Fabergé, I think I would be interested in the exquisite hard stone carvings and flowers.  In the Royal Collection (Queen Elizabeth II has probably the largest collection of Fabergé in the world, including three Imperial Eggs and a slew of other items), there is a stone carving of a royal dog with “I am the King’s” on his collar.

Perhaps the most elegant pieces are flowers, enamel or for my taste precious and semi-precious stones, in a rock crystal vases carved to look like water in glass.  I particularly remember a couple of sprigs of bleeding hearts in rhodonite and quartzite and jade leaves on gold stems en tremblant (the flowers were fixed so that they could move slightly as if they were real).  It is a piece fit for a queen, and indeed it belonged to Queen Mary.  (One had to watch Queen Mary; she was quite capable of admiring an antique and then, like the European princess she was, expect it to be brought round to the Palace for her.  I seem to recall that, after Queen Mary’s death, Queen Elizabeth, the late Queen Mother, is supposed to have gone round the Buckingham Palace with a footman to see what she should return to the original owners.  One collector, who had part of the carpet from the Royal Pavilion in Brighton, managed to avoid Queen Mary’s requests to visit for that very reason.)

Granting Fabergé’s brilliant designs and exquisite craftsmanship, his pieces may be worth it.  On the other hand, there were other Court Jewelers (Bolin comes to mind), and many of the non-Fabergé egg pendants are lovely.  Still, when Romeo asks “What’s in a name?” the answer is “plenty!”  That is, if the name is Peter Carl Fabergé.